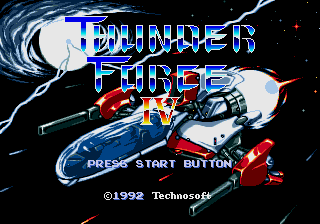 So I’ve decided that I want to write more and keep this webiste a bit more alive, even if I can’t talk about what I’m working on just now. As such, I’m starting a wee series of posts that will be… mostly about games and sound and music to some extent but probably any topic or thing that tickles my fancy. In order to stop rambling too much, I’ve given myself 500 words, intros and notes/annotations not withstanding. So here’s hoping someone gets something out of it!

And on that note, today’s post is about Technosoft’s final Mega Drive/Genesis STG/Shmup – Thunder Force IV.

There are very few game soundtracks that I will actively listen to on repeat. This doesn’t mean I won’t listen to any odd OST here and there, but few I just enjoy listening to over and over. Recently, it’s been Thunder Force IV and, oh boy, is it a ride.

The SNES/Mega Drive sound wars have raged since time immemorial, but a general consensus is that each has its own strengths and weaknesses. The SNES held its own with orchestral and “realistic” instrumentation[1], while the MD’s prowess lay in its more aggressive, bass heavy sound. The most notorious MD composer is arguably Yuzo Koshiro of Streets of Rage and Shinobi fame[2], but he isn’t alone in being able to bend the MD’s FM synth into producing memorable, clever music and sound design. Enter Technosoft:

Technosoft moved into the console space from PCs, as opposed others who produced ports of their arcade output. This transition was originally eased given the similarities and shared chipsets and development toolsets between the Sharp X68000 and the MD, and it shines in their musical output.[3]

Musically TFIV moves between some very ’80s tropes: OTT heavy metal, with weighty percussion and ridiculously good guitars (bear in mind, these are synthesised in a game from 1992) that still hold up today, hard rock, and electro pop/jazz fusion that was popular in Japan during that decade[4]. There is a hard divide between the heavy metal tracks, reserved for the intro and boss fights to really drive home the action, and the groovier, somewhat more laid back level tracks.

Compare The Sky Line (Stage 3-A), Air Raid (Stage 3-B) and Simmer Down (Stage 3-Boss), and you can hear the various genres poking through. The core elements underpinning the OST play to the MD’s strengths: the percussive samples and strong, defined bass sound.

TFIV is also a very pretty game, with a multitude of sci-fi skyscapes and backdrops panning a plethora of influences. From Stage 2’s ruined space colony a la Gundam, complete with mech miniboss, to the biomechanical factory of Stage 8 and its Giger-esque final enemy, there are a number of things that may catch your eye. There’s a wonderful verticality to some of the stages that help further differentiate the game from its peers at the time[5], which generally scrolled in one direction. And, because it’s the ’90s, some nice parallax scrolling in there too.

The game itself is also pretty fair given its genre. This may be down to Technosoft’s origins in PC over arcades, where coin guzzlers’ inflated difficulty often just carried over to their respective ports (Hi SNK!). But they also realised that their own games could be overly hard, balancing TFII with its MD release before fully committing to the console. Oh, and it was optimised for us poor PAL folks.

And that’s the icing on the cake. TFIV is a showcase of a company’s mastery over the hardware they’re using on a number of fronts. So if you can, try pick it up.

[2] While his roots are in FM music, Koshiro has a far more extended repertoire, including an early showcase of the SNES’ musical capabilities in the Actraiser series. More recently, he’s worked on the Etrian Odyssey series using a mixture of the two styles.

[3] For more details on Technosoft and the MD Thunder Force games check these interviews on Shmuplations: http://shmuplations.com/thunderforceiii/

[4] Jazz fusion influenced an number of game composers. You may recognise this T-Square track from a certain fighting game…

[5] While in Stages 1 and 4 this is a fairly cosmetic thing, later stages introduce more environmental hazards to the mix to make the most of the effect.